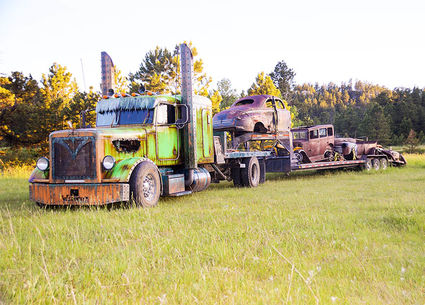 It's not every day that a reality television star roams the streets of Ekalaka. It's more of a Tuesday afternoon sort of thing. Tuesday, June 6 to be more specific.

On Tuesday, Steve Darnell, the man behind Welder Up, was in town in search of cars and junk. Darnell is originally from Billings, MT and now lives in Las Vegas, NV where he runs his shop. He and his crew customize cars and build rat rods for customers. The shop is featured on Vegas Rat Rods which airs Monday nights on Discovery Channel.

Darnell has been visiting family in the area since he was a kid. "I used to come here to dock lambs at Higgins' and go to team ropings," he said. "Now I don't make it up very much because I'm so busy."

Darnell is related to multiple families in the area, including the Higgins family and the Dague family.

With new episodes currently airing, Darnell somehow found the time to come visit. This time he brought a truck and trailer and went picking. While in Carter County, he purchased multiple cars, a dirt bike, a lawn tractor, a windmill, and literally tons of other "junk." All of it will eventually make its way back to his shop in Las Vegas. It could even end up being used on part of a build that airs on the show!

One of the cars he found in the county, an old Dodge sedan, might look familiar to fans of the show. The car is the same as one he used for his most famous build, named "The D-Rod," which sports a turbocharged Cummins engine.

Darnell's cars are anything but ordinary. He creates mad looking cars with a creative use of materials. To the people he buys materials from, its junk. But to him, that junk can be used to give perfect detail to a build. 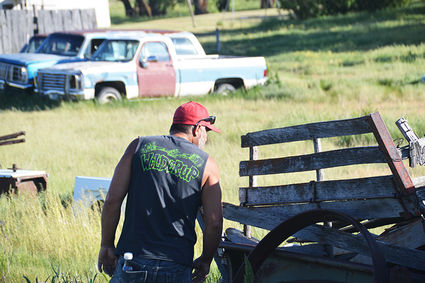 The Welder Up crew picking in Carter County.

Yet, as crazy as his builds are, Darnell seems to be just a good ole' Montana boy. While in town, he stopped at several businesses and greeted everyone passing by with a smile and a handshake. He mentioned that a break from all of the cameras was relaxing, but was still kind enough to take a few pictures and sign autographs. He even stopped by The Church of Hank Williams.

No, Tuesday was not ordinary, but somehow Darnell made it feel that way. He will be heading back to his shop in Las Vegas late this week, having gained a few new fans from this small area.

The next time he comes to visit family, there will undoubtedly be more junk to pick through. If he wants.

More pictures and information about Darnell, Welder Up, and the crew can be found at http://www.welderup.com and http://www.facebook.com/welderupvegas/.