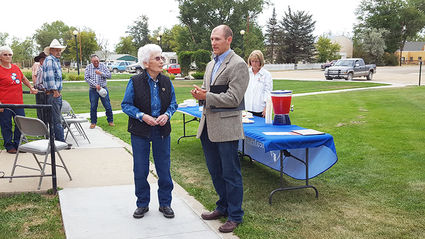 On August 14, a congratulatory ceremony was held on the north lawn at Dahl Memorial Healthcare in honor of Belle Wendelburg. Wendelburg was named Montanan of the Week by Senator Steve Daines earlier this year.

Nathan Adams, a representative from the senator's office, traveled to Ekalaka to officially recognize her. At the ceremony, Adams read from the Congressional Record in which Wendelburg was named Montanan of the Week.