By Rick and Susie Graetz
University of Montana Department of Geography 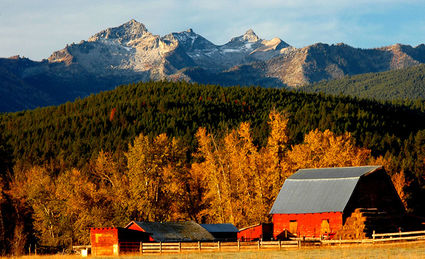 A red barn stands along the foothills of the upper Bitterroot Range as autumn leaves begin to turn color.

Though its length is short in comparison to other major Montana rivers, the landscape the Bitterroot River flows through is long in beauty and historical significance. Guarding it on the west is the abruptly rising Bitterroot Range, while the lower-profiled, forest-covered Sapphires Mountains look down from the east. The surrounding valley is one of the fastest growing regions in the state.

The west and east forks of the Bitterroot, rushing out of opposite mountain ranges, join near the small hamlet of Conner to create the river named for Montana's state flower. From the beginning of its flow, the river heads north and covers about 80 water miles – only 65 or so by air – until it gives up its identity to the Clark Fork River at Missoula. The gradient is relatively gentle, as only 900 feet of elevation is lost.

The East Fork of the Bitterroot comes off the Continental Divide in the Anaconda Pintler Wilderness well to the east of the valley. Near Sula it meanders through historic Ross' Hole. The hole, as trappers called high mountain valleys, was a gathering place for Native Americans and later trappers. Named for mountain man Alexander Ross, who along with his party was trapped by snow near the Bitterroot headwaters in 1823, it also was a place of significance to the Lewis and Clark Expedition.

There is a great deal of controversy among professional and amateur scholars alike as to the exact interpretation of the two captains' journals. According to Stephen Ambrose in Undaunted Courage, "The confusion of creeks and ravines cutting through the steep mountainsides has made the route the expedition used one of the most disputed of the entire journey." So suffice to say, they may have stayed on the Bitterroot Divide for a while before dropping down on Sept. 4, 1805, near the East Fork of the Bitterroot River and Sula at today's Ross' Hole. Here they met the Salish – the captains called them Flathead – who were on their way to Three Forks to meet Cameahwait (Sacajawea's brother) and his Shoshone people to hunt buffalo. Clark estimated the encampment to be "a nation of 33 Lodges about 80 men 400 Total and at least 500 horses."

Ridding themselves of some of the lesser desirable steeds they had traded for in mid-August with the Shoshone, the Corps upgraded its herd by purchasing 11 "ellegant horses" and "exchanged seven for which we gave a fiew articles of merchendize."

Leaving the Salish on Sept. 6, they met and followed the East Fork of the Bitterroot River on the east side, camping a few miles northwest of Sula. At first, the captains called the present Bitterroot "Flathead river," then soon thereafter renamed it "Clarks river." Meriwether Lewis, in his journal, described it as "a handsome stream."

The Corps would have passed the mixing spot of the East and West Forks. The West Fork starts on the Bitterroot Divide and the Montana/Idaho state line southwest of Highway 93 and Lost Trail Pass. On its way to the valley, it fills in Painted Rocks Lake, a reservoir named for the Native American pictographs on the rocks along the west side. Further down the West Fork, Alta – the nation's first U.S. Forest Service Ranger station – still stands. Passing Conner, the East Fork meets its counterpart, and the Bitterroot River is propelled forward.

On Sept. 7, 1805, the Corps of Discovery followed the Bitterroot River on a relatively easy course. The men had a close view of the seemingly insurmountable Bitterroot Range to the west, and as Sgt. Patrick Gass so aptly put it, "the most terrible mountains I ever beheld." Noticing snow on the peaks, they wondered if winter was making an early approach. Camp that night was near today's Grantsdale on the east side of the river. On Sept. 8, their night's stay was close to Stevensville on the right riverbank, where numerous streams enter the Bitterroot. 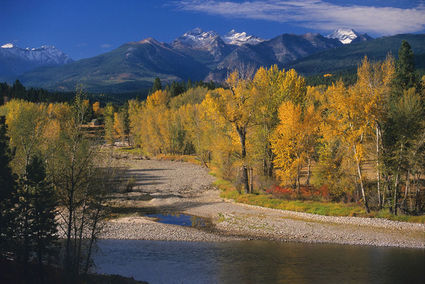 The Bitterroot River, described by Meriwether Lewis as "a handsome stream," winds below Como Peaks.

It was at the confluence of the Bitterroot River and Lolo Creek, that they established one of their better-known camps, "travellers rest."

Lewis' journal entry of Sept. 9, 1805, reads, "Set out at 7 A M. this morning and proceeded down and the Flathead (Bitterroot) river leaving it on our left, the country in the valley of the this river is generally a prarie and from five to 6 miles wide," continuing downriver and eventually crossing to the west side "encamped on a large creek (Lolo Creek) which falls in on the West as our guide informs us that we should leave the river at this place and the weather appearing settled and fair I determined to hault the next day to rest the horses and take some scelestial Observations. we called this Creek 'Travellers rest.'" The spot is located about 1 mile up from the creek's junction with the Bitterroot River by the town of Lolo.