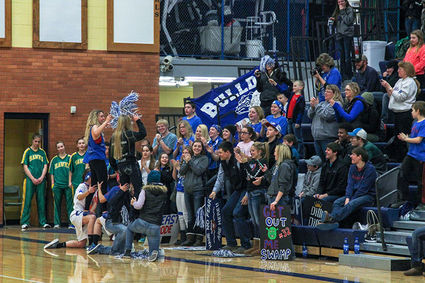 CCHS fans cheer on the Bulldogs during their game against Broadus.

CCHS opened their play in the District 4C Tournament against Jordan on Wednesday. The Bulldogs got off to a bad start and were down 4 to 17 at the end of the first quarter. Though they showed bursts of scoring, they were unable to come back, eventually losing 41-58. Mick O'Connor hit the only three-pointer for CCHS as they went 1-7 for the game. He also had the game's only dunk, led all scorers with 21 points on 9-16 shooting, and led the game in rebounds with 11.