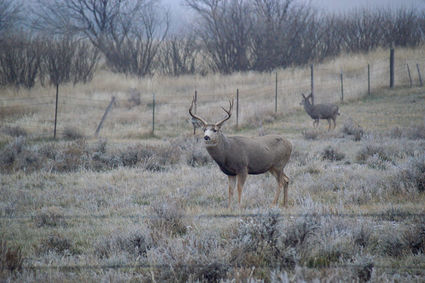 Regional Wildlife Manager John Ensign said this year there are 320 landowners offering public hunting access to almost 2,200,000 acres across southeastern Montana through the Block Management Program. August 22 was the first day to make reservations to hunt Block Management Areas. The program encompasses nearly 15 percent of private land in the region, he said. That's significant for access, because 75 percent of the land in southeastern Montana is privately owned.

Referring to enrolled lands, Ensign said, "They are all nice properties. I wouldn't hesitate to hunt any of them."

He also noted that the 900-series archery-only antelope hunting season opened on August 15.

Region 7 biologists have been busy with surveys to assess wildlife populations and distribution. Following last year's drought and a tough winter, there was concern as to how the animals had fared, Ensign said. Deep snows hindered wildlife movements and foraging, especially for antelope, and it was difficult to determine whether mortalities they observed were isolated or more widespread.

However, he said, "After surveys, things weren't as bad as we anticipated."

"Mule deer across the region ended up with a 21 percent decrease from last year, but last year we were 47 percent above the long-term average," Ensign said.

In 2018 surveys, mule deer are still doing well at 26 percent above long-term average. There was a little more mortality over the winter, but recruitment is strong at 49 fawns per 100 adults. Observing this, Region 7 opted to keep the mule deer antlerless quota at 11,000.

Winter was toughest on antelope in the northern and western portions of the region, but overall populations are right at the 10-year average, Ensign said. Surveys are strong with 59 bucks per 100 does and 77 fawns per 100 does. There are also a lot of young bucks on the landscape. Region 7 opted to bump either-sex tags from 7,500 to 8,000 but kept doe/fawn tags at 1,500.

Elk seem to have weathered the winter well. A couple of game damage hunts near Birney ended Aug. 31.

Ensign hasn't observed many upland game birds, and he fears that winter and frequent rains during spring hatches may have taken a toll on bird numbers.

The wildlife staff also is working on a couple of conservation easements in the region, and there are several other possibilities. Public comment will be taken through Sept. 9 on the proposed North Sunday Creek Conservation Easement near Angela (fwp.mt.gov).

Rep. Holmlund said there's been quite a bit of conversation in legislative circles about adjusting a new funding formula that significantly shifted warden duties beginning in 2017.

Enforcement staff must now spend 30 percent of their time on non-enforcement activities, up from 4 percent. This is because the Legislature increased the amount of their salaries that is funded by federal Pittman-Robertson money, which comes from an excise tax on guns and ammunition. These funds can only be spent on wildlife restoration and management.

Holmlund said the talk is about reducing that percentage to lessen the impact to enforcement duties.

Regional Supervisor Brad Schmitz agreed that there is a lot of room to look at the legislation's original intent and make changes.

CAC member Ed Bukoskey said the Private Land/Public Wildlife Council, of which he is a member, also favors a reduction in the formula.

Warden Captain Jack Austin said warden turnover continues to be a challenge for his division, mostly through transfers to western regions. In the past year or so, Region 7 has seen shuffling in all but two warden districts. Wardens are under contract to remain in their initial duty station for 30 months, but they can apply for a transfer after two years.

Warden pay has increased, but Schmitz said there are many reasons factoring into turnover. They have discussed the issue for years, with no obvious solutions.

"And many of them come back later and say this is the best region we've ever worked in, so we've scratched our heads over it," he added.

CAC member Dale Kreiman speculated that some wardens become overwhelmed after seeing the expanse of their district.

CAC member Bob Gilbert asked if requiring a bachelor's degree is a deterrent, but Schmitz doesn't want to see that bar lowered.

Captain Austin said it's frustrating, but he also doesn't want to hold anyone back from what makes them happy.

This year's paddlefish season was nothing like last year's, said Region 7 Fisheries Manager Mike Backes. The 2017 season was over in four days, while 2018 stretched into 15 days without reaching the harvest cap of 1,000 fish. Multiple surges of high water scattered fish everywhere.

The Glendive Chamber of Commerce still had good egg collection for caviar production, however. Another positive is that one in every 10 fish caught was probably from the 2011 age class, which could be as large or larger than the 1995 age class that now dominates harvest.

"It appears that maybe we don't have the concern of cutting back the [harvest] cap," Backes said. "From a paddlefish standpoint, things look pretty positive."

But a federal fish passage project around Intake Diversion Dam could bring some major changes in paddlefish migrations and monitoring efforts. Intake Fishing Access Site has long been the center of paddlefish harvest because the dam blocks their movements upstream to spawn. But Backes is confident that paddlefish would use the new passage, which could significantly disperse the fishery. In recent high-water years, some paddlefish used a historic side channel at Intake to travel as much as 90 river miles upstream to the Powder River. Endangered pallid sturgeons that have been translocated above the dam have shown similar tendencies.

If the bypass is completed as expected within the next three years, Backes hopes there will be better recruitment and more areas to spawn for both species, but it will mean rethinking FWP's research efforts.

"It will be a complete retooling for my staff and program, a completely new dynamic," Backes said.

In other fisheries topics, Backes said ice jams on the Yellowstone River and subsequent flooding did significant damage to Elk Island Fishing Access Site near Sidney this winter. Two boat ramps were destroyed, and flooding cut off access. FWP also lost a fishing access site in the Miles City area recently, but new sites are being considered.

Ponds in the Plevna, Baker and Ekalaka area received considerable runoff this spring, but the area north of Miles City and Cherry Creek did not. Some ponds didn't warrant stocking, but FWP will attempt to do some wild fish transfers this fall for species like bluegill, crappie and perch.

Backes sits on a statewide committee that is reviewing hunting and trapping regulations. The group's suggestions will go to FWP's director in December. Backes welcomed any input on regulations from the CAC members.

Chronic Wasting Disease will be one of the main topics when FWP's Communications/Education division meets in Helena in October, according to Region 7 Information Officer Marla Prell. Positive CWD detections in deer harvested in Regions 4 and 5 in 2017 prompted two special CWD hunts last year to determine prevalence of the disease in those areas. Surveillance efforts will continue this year, and the agency is honing its response to future incidences of CWD. Staffers in various divisions are taking Incident Command System training as part of that preparation.

Starting this summer, people taking the online Hunter Education program in Montana will complete their test not online, but in person at a Hunter Ed field day. This change was to ensure that the student cannot have someone else take the online test. Currently, Region 7 has about 80 volunteer Hunter Ed instructors in 11 counties. More than 380 students took the course in the past year, 40 percent of whom are female. The Apprentice Hunter program continues to be very popular, allowing people age 10 and older to become certified to rifle hunt with a mentor for two seasons before having to complete a Hunter Education course. Well over 5,000 people became apprentices across Montana last year.

Bowhunter Education has 35 instructors in Region 7, who taught 80 classroom students and 90 online students in the past year.

Through the Aquatic Education program, Region 7 hosted multiple kids' fishing days and distributed fishing rods to more than 800 youths across the region this past year, teaching kids about water safety, fish identification, hypothermia and casting.

Regional Supervisor Schmitz touched on efforts by new FWP Director Martha Williams to unify the agency, including the new Parks in Focus group, an all-staff meeting in Helena in April and a joint meeting with Regions 6 and 7 in June. He stressed the positives of allowing employees to develop a common philosophy and discuss how FWP meets customers' needs.

Noting several conservation easements in the works, Schmitz expressed support for the lasting value that these agreements provide, even though they are complex, time consuming and sometimes controversial.

He thanked CAC members for coming and for bringing their spouses. Schmitz said the CAC will meet again in December prior to the legislative session, and area legislators will be invited.

Dale Kreiman said a lot of out-of-area hunters visiting his Block Management Area are impressed by the resource and by the people. He has seen few upland birds but notes good numbers of antelope and fawns. He is concerned that fewer youths are hunting, but Office Manager Erin O'Connor said the number of Apprentice Hunters and students in Hunter Education programs is holding steady.

Rep. Holmlund shared an update on the Hell Creek State Park road project. Contractors had to use much more gravel and magnesium chloride mix than expected to improve the base. There are some soft spots, but neither time nor funds is available to fix them. An eighth of a mile did not get done. Holmlund cautioned that repairs will last longer if people do not speed on the roadway.

Bob Gilbert is involved with the License Funding Advisory Committee, and he has been weighing options for Aquatic Invasive Species funding. He also would like to see a change in the requirement for using well water to transport fish in live wells.

Ed Bukoskey said he has suggested to the Private Land/Public Wildlife Council that a $10 fee should cover both CWD and AIS. The 454 permits issued to landowners for management purposes also were discussed.

Gary Sparks praised the programs available through FWP's Montana Wild education facility in Helena, noting that Plevna students visited in part thanks to a grant. He would like to see more schools in the area take advantage of this.