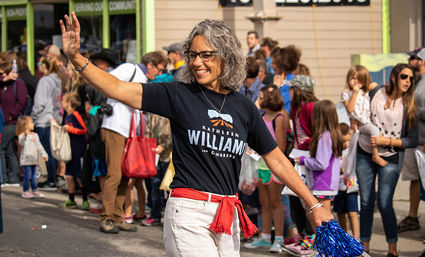 On a brisk mid-September morning, Gallatin County Democrats circled around a rippling blue tarp, one adorned with sequins and glitter, and grabbed an edge of the wave.

Kathleen Williams' campaign manager focused the excitable group of more than 40 people. "On three. Just like we practiced," he said. "One, two, three ... Hey, hey/Ho, ho/Gianforte's got to go."

The group ran through a couple chants as staff and volunteers waited for Williams, the Democratic nominee in this year's race for Montana's lone U.S. House seat, to join Belgrade's Fall Festival parade.