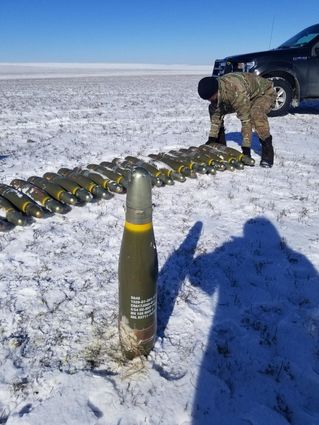 Military projectiles were detonated in a field near Hammond last Monday after a wreck involving multiple trucks occurred on Highway 212.

A wreck involving three trucks on Highway 212 last Sunday near Hammond resulted in traffic being shut down until the following evening. The incident happened at around 9 p.m., during a ground blizzard with strong winds and blowing snow which likely were factors.

Two of the trucks blocked both lanes of the highway. The third ended up well off the road after the driver attempted to avoid the first collision and went into the ditch.

One of the trucks that was blocking traffic was carrying fertilizer. The other was carrying military projectiles which scattered out during the crash.