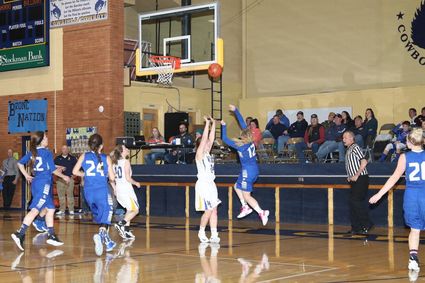 Whitney Kittelmann takes a shot over Longhorn defender Layni Schieffer in Saturday's championship game. CCHS won the contest, 61-55. Box scores from the tournament can be found on page 1 and page 5.

After splitting games with Wibaux and dropping two to Melstone in the regular season, the CCHS Lady Bulldogs beat both teams when it really mattered and came away with a first place trophy from the District 4C Tournament in Miles City over the weekend.

Lady Blue had little trouble in their first contest against Jordan, winning 55-14, even though they had 30 turnovers. CCHS had 19 more rebounds than the Mustangs. As a team, they shot 37 percent on field goals in the game compared to just 9 percent for Jordan. They also shot better from the charity stripe (50%) than Jordan (25%).