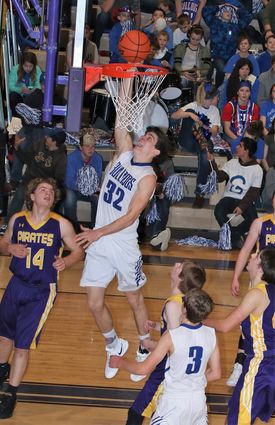 Mick O'Connor goes up for a dunk during the Bulldogs' win over Broadview/Lavina.

The Bulldogs headed into the Southern C Divisional as a three seed after an exciting consolation win over Broadus at districts. In their tourney opener they played Park City. Blue was down only 5 at the half, but couldn't keep pace after that. It was a close game until late when the Dogs were forced to foul. Park City eventually won by 16. The Dogs shot 1-15 from three-point land, 15-52 (29 percent) on field goals and 8-20 on free throws. They committed 17 turnovers compared to 20 for the Panthers. Mick O'Connor led the way for CCHS with 20 points and 8 rebounds.