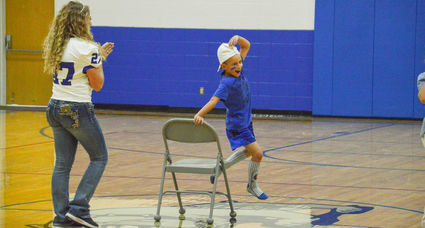 Jaxen Walker celebrates after winning an intense game of musical chairs against other grade schoolers at the homecoming pep rally last Friday afternoon.

Heather LaBree led the team in aces with 5. Ella Owen and Kenzie Tooke tied for a team-high 7 kills. Owen also led the team in blocks with 12. Whitney Kittelmann had 18 of the team's 26 assists.

Jordan's Grace McDonald had 29 of the Mustangs' 74 digs. As a team, Jordan totaled 4 aces in the match.

This Friday CCHS Volleyball will play Terry at home. On Saturday they will travel...