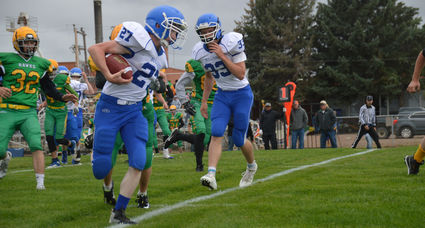 CCHS defeated Broadus on their homecoming for another conference win last Saturday, bringing their record to 4-0 on the season.

On Broadus' first possession, senior Mick O'Connor sacked the quarterback on second down, forcing a long third down and an eventual Broadus punt.

Starting their first possession around midfield, the Dawgs drove the ball down the field on runs from Seth Kennedy and Shayne Enos. They eventually scored on an Enos run. Kennedy ran in the conversion to give Blue an early 8-0 lead.

Broadus turned the ball over on down on their second possession. Again, Enos and Kennedy...