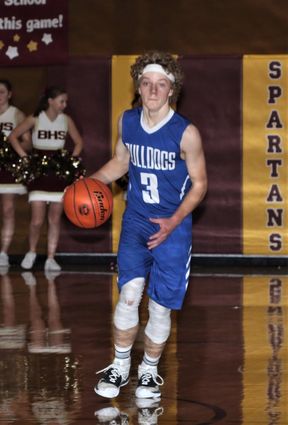 Turner Tooke brings the ball up the court during the Dogs' loss in Baker last Friday. Tooke hit six three-pointers and had a game-high 19 points in the contest.

Sophomore Turner Tooke hit six three-pointers and had a game-high 19 points, but it wasn't enough as Ekalaka fell to Baker in an away game last Friday.

Blue had trimmed the Spartan lead to just three points heading into the final frame before Baker outscored them 17-9 in the fourth.

Three of Tooke's six makes from behind the arc came in the third quarter. Three Bulldogs scored in the contest. Six Spartans scored, led by Garrett Lesh who had 12.

The Dogs had 14 turnovers, compared to 12 for the Spartans.