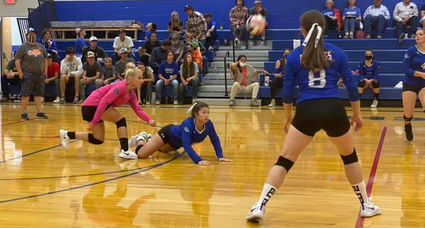 The Carter County Varsity Volleyball squad convincingly won their homecoming match in three sets versus the Wibaux Longhorns last Saturday. The girls won the first set 25-20, the second 27-25 and the third 25-17. Ella Owen led the way with a team-high 6 aces and 16 digs. She also tied with Katie Tooke for the lead in kills with 7. Codi Melton and Kenzie Tooke each had 2 of the team's 6 blocks and Heidi LaBree had 20 of 22 assists.