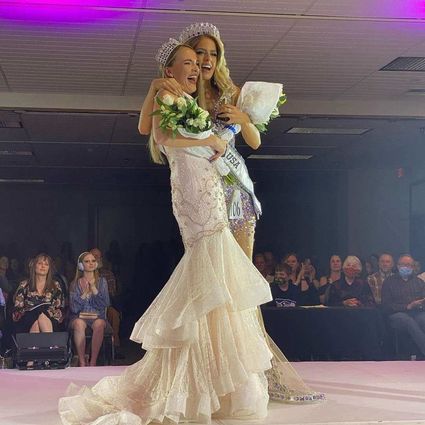 Earlier this year, local teen Katie Tooke was battling health problems. She spent almost an entire month seriously ill before finally being diagnosed with an autoimmune disorder. That was about the same time everything got shut down due to the coronavirus pandemic. Ekalaka Public Schools went to online instruction from March 16 through the end of the 2020-2021 school year. Tooke was at home, isolated from friends and activities like the rest of her classmates.

After a rough three months she decided to make some changes.

"In those three months I realized how much I took life for granted. I said Katie, you gotta do something with your life," she told the Eagle on Tuesday.

So, she created what she described as her "bucket list."

The list started with small items, and Tooke completed them. She solved a Rubik's Cube, learned how to yodel and practiced volleyball - a lot. As she crossed items off the list, the items on it grew more substantial.

She was completing school work on her computer at home when she suddenly decided to move to one of the biggest items.

"I had always wanted to be in a pageant," she said. "I realized I could sign up and went 'yep, I'm doing that.' I filled out the application and asked my parents after. Signing up was sort of like me cutting my own bangs."

After signing up, Tooke spent the summer working as a nanny for two children in addition to working in the dietary and maintenance departments at Dahl Memorial so that she could pay her own way into the pageant. Including her gown, attire, entry fees and a coach, she estimates she spent about $4,000 total.

Tooke knew that the Miss Montana Teen 2021 pageant was scheduled for September when she signed up, but she admitted that she didn't know how much work it would be. Early in August she met with Jami Forseth. Forseth, sister to local Jessica Meyer, was competing in the Miss Montana 2021 pageant which coincides with the teen pageant. She offered Tooke advice and helped point her in the right direction.

On August 14 Tooke met with a coach. From then until the pageant took place last weekend they met nearly every night online and prepared.

"I learned how to do makeup about a week before the pageant," she said.

As someone brand new to pageantry, Tooke didn't have her sights set to high.

"I guess I made top five. That's pretty cool," she said.

Once the judges started announcing the placing of the top five, Tooke waited for her name to be called. For each place, she expected to hear her name. She didn't. Suddenly, it was the top two, and she was announced as Miss Montana Teen 2021. It came as a big surprise to the first-timer from Ekalaka.

Not only did Tooke win, Forseth was crowned Miss Montana 2021.

After she was crowned, Tooke took pictures and then sat down for a few hours of paperwork before getting to spend time with pageant staff and fellow competitors.

In addition to the crown, she also won the Miss Spirit award for her happy and positive demeanor backstage.

Tooke said that she gets to be in control of all of her appearances and will wait until the current CCHS volleyball season is over to start scheduling.

"I want to travel to schools and talk about training yourself inside and out," she said. "Taking care of your body, developing motor skills and mental health. Sort of a jack of all trades."

Tooke is currently a sophomore at CCHS. She is involved in FFA, 4-H, Science Club, Science Research and plays volleyball. She serves as the FCCLA chapter president and district secretary.

As Miss Montana Teen 2021, she will receive a number of sponsorships and scholarship offers. To date, those total close to $40,000 she said.

Tooke plans to go into some sort of medical field after high school. Currently she intends to obtain a PHD in psychology but admitted that she changes her mind a lot; a statement common for many tenth graders throughout the country.

Next year she will compete for Miss USA Teen. Until then, she will enjoy her time as Miss Montana Teen and as a student at Carter County High School who is involved in several extracurriculars . She's also going to continue crossing items off her list.

"I hope to get the most out of this crown that I can," she said. "I'm definitely excited about it."

Katie Tooke is the daughter of Ryan and Johanna Tooke of Ekalaka.