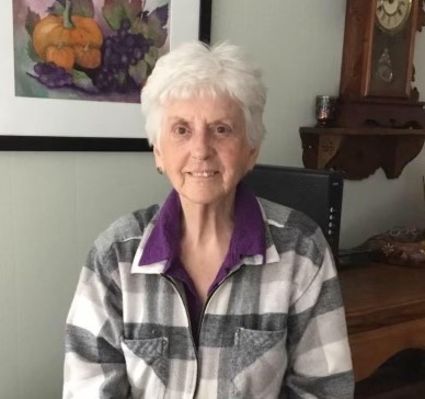 Phyllis Wrethea (Taylor) Purdum was born December 18, 1929 in Ekalaka, Montana. She passed away December 20, 2020 in Eugene, Oregon of a sudden heart incident at the age of 91. In between she lived a very full and active life as a daughter, sister, friend, teacher, wife, mother, business woman, grandparent and great grandparent. Her family and friends will miss her ability and desire to always do the right thing, and be the compass to guide them. She always approached her day with determination and energy. Sometimes she was a bit of a worrier, but was always able to laugh at the vagaries of life.

Her parents, Alverzo Ernest Taylor and Leta Curry Taylor welcomed Phyllis as the eldest daughter and middle child, eventually of a family of five children; two older brothers, Keith and Vincent and two younger sisters, Selma and Marieta. Her parents were cattle ranchers in the Belltower Community south of Ekalaka. Phyllis said she was inspired to learn how to read from watching her dad Ernie read the Ekalaka Eagle. The kids went to Belltower country school through 8th grade and then they batched in Ekalaka in order to attend Carter County High School.

Phyllis graduated in the class of 1948. She took teacher training in Miles City and was a country school teacher for Carter County for several years. She married Ronald Purdum June 8, 1951 in Miles City, Montana.

Ron and Phyllis moved to Cherrypoint, North Carolina during Ron's service in the Marines where their eldest daughter Rhonda was born. When Ron left the service, they moved to Chalk Buttes homestead and cattle ranched until deciding to move to Bozeman so that Ron could attend college. Phyllis delivered her daughter Dawn there. They eventually moved to Billings where son Rod was born. Ron's job then took them to Havre where son Russell was born. In 1968 they moved to Miami, Arizona where Phyllis was active in raising her children and leading a 4-H group. They lived there for 5 years before moving to Albany, Oregon.

Phyllis opened the Strawberry Dresser, a women's dress shop in Albany. After 7 years, she closed the store and worked as a bookkeeper in Corvallis. She eventually retired to Eugene, OR where she lived in an over 55 community, and became an ardent Duck fan. Living there since 1994, she enjoyed her gardening and landscaping and updating and maintaining her home. Her club activities were numerous, everything from greeting new people, being treasurer and helping out at many parties, memorials and celebrations.

She made a point of getting to know people and had many long-standing friendships. She enjoyed returning to Ekalaka, Montana for the Days of '85 celebrations to catch up with relatives, former students, classmates and friends. She was also a student of oil, acrylic, and water color painting and loved to play the piano.

At Phyllis's request there will be no public service in the future. Her remains will be cremated and interred in the Ekalaka cemetery.