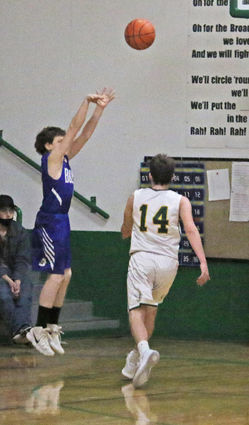 Sophomore Sean Wolenetz hit 4 three-pointers against the Broadus Hawks in a varsity game at Broadus on Tuesday. The varsity boys lost that game, 52-65. Game stats and stories from Broadus will be published next week after stats become available.

On Saturday the CCHS boys JV basketball team traveled to Plevna to take on the Cougars. No varsity game was played as Plevna is playing a JV only schedule this year, so the varsity boys had the weekend off.

A tightly contested game early saw the Dogs with a 15-point lead at the end of the third quarter. Plevna closed the gap some in the fourth, but CCHS JV came away with a 7-point victory. Blue shot 14 of 24 on free throws. Sophomore Jaden Pardee was the game's leading scorer with 18 points. He also had 18 rebounds and fouled out of the contest. Ethan Mellon had 14 points for the Cougars.