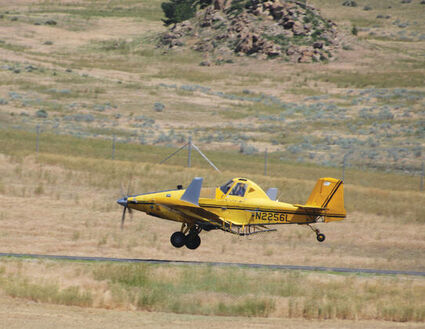 A spray plane touches down at the Broadus airport after completing a round of treating rangeland with Dimilin, a growth regulator for grasshopper control. Crop Dusters, LLC, had three planes flying in order to treat nearly 200,000 acres in Powder River and Carter County as part of the APHIS grasshopper suppression program that took place at the end of June. More information on the project can be found on page 5.

Planes in the Air: When asked the first of June what I thought the chances were of the APHIS grasshopper treatment program happening, my response was "10%." On Tuesday, June 22nd, I heard the first plane flying west of Biddle. The next day, I saw a plane returning to the airport at Broadus which I followed in to take a closer look. In speaking with Taelor Anderson and Hannah Lewis, our local Animal Plant Health Inspection Service, Plant Protection and Quarantine (APHIS) representatives, I learned that nearly 24,000 acres had been sprayed the first day, with wind shutting the pilots down in...