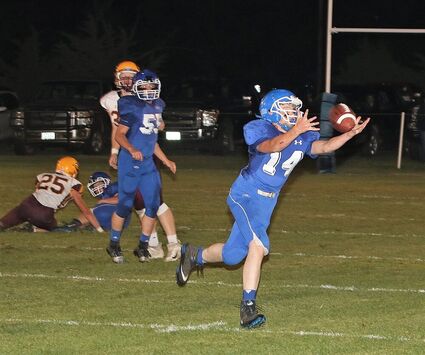 Bulldog Junior Sean Wolenetz catches a pass from Turner Tooke during the final minute of the first half versus Circle last Friday in Ekalaka. Wolenetz caught the pass and got out of bounds to stop the clock, setting up an important scoring drive that would prove pivotal in the game's outcome as CCHS went on to win, 58-40.

The Bulldogs won a barn burner versus the Circle Wildcats on Friday night at Rowley Field. Both offenses were finding success with the run game, especially in the second half. There were three scores all within 1:34 at one point in the fourth quarter.

The pivotal moment in the game proved to be in the final two minutes of the first half. The Bulldogs were up two points but Circle had the ball deep in the red zone when a fumble resulted in a turnover. A quarterback sneak on the following first down gave Blue a little breathing room from their own end zone. With about one minute remaining, Ci...