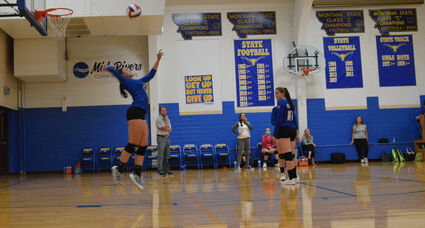 Codi Melton jump serves during the Lady Bulldogs' win at Wibaux on September 4.

High school volleyball had a busy weekend with matches at home versus Circle on Friday and in Wibaux on Saturday.

The girl's junior varsity squad kicked things off with a tightly contested set against Circle, eventually winning 27-25. However, CCHS went on to drop the next three sets and lose the match. As a team, they compiled 9 aces and 17 digs. Three players led the team in aces with 2 apiece. Kendra Tooke led in kills (3 of 7) and aces (4 of 5). Kendall Kittelmann had 5 of the team's 17 digs.

The varsity Bulldogs had a rough outing against the Wildcats, losing three consecutive sets, 8-...