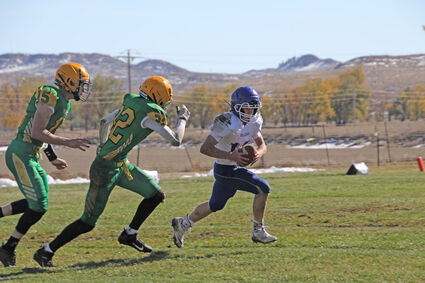 Senior Turner Tooke shined in his final game at quarterback for the Bulldogs. Above, he outruns a pair of Broadus Hawk players.

Carter County High School defeated Broadus by twenty-six points in their final game of the football season on Saturday. The game took place in Broadus and featured the fourth place team from each of the Montana 8-Man Eastern Conference's sub-divisions.

On the Bulldogs' first possession, senior quarterback Turner Tooke turned a broken play into a long touchdown run. After that play, the game was never in doubt.

In the second half, every Bulldog player got into the game. CCHS continued to keep the ball on the ground in an effort to run the clock. Broadus, meanwhile, slowed the game down by c...