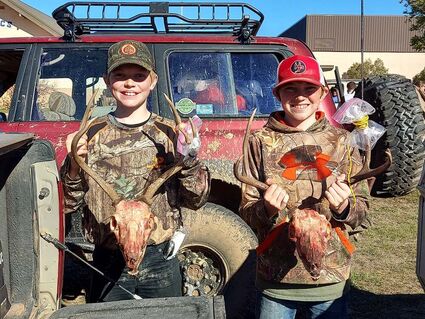 Brothers Blain Priest (left), 12, and James Priest, 14, pose with the bucks they harvested over the weekend. This was Blain's first big-game harvest, and the family's first year hunting in Montana. The boys had to be talked out of putting down some tasty Indian tacos they picked up at a friend's house after their hunt to take a photo at the Ashland check station. Dad Jim and Mom Genevieve accompanied them on their hunt.

The general season opener brought mild weather and plenty of hunters afield. Below is a look at what Montana Fish, Wildlife & Parks staff observed at three Sunday check stations operating in southeast Montana.

"It was a pleasant weekend near Ashland, and hunters enjoyed being afield," said wildlife biologist Ryan DeVore.

The success rate was similar to the same weekend in 2018 and moderately higher than the last couple of years.

"One common theme from hunter experiences is that mule deer numbers are low in the southern portion of Region 7," DeVore said. "This is what FWP has observed as well, and the department continues to suggest to hunters who plan to pursue mule deer in this area to consider looking elsewhere. Persistent, severe drought beginning in the spring of 2020 has impacted mule deer fawn recruitment over the last two years and has contributed to the decline in numbers in the southern portion of the region."

FWP staff were assisted at the check station by Shane Petch, elk research technician for FWP; Autumn Keller, wildlife biologist for the U.S. Forest Service out of Ashland; and graduate student Elisabeth Krieger.

"It was a very normal opening weekend, and the weather was pleasant, and hunter harvest statistics at the Hysham check station were consistent with most opening weekends," said wildlife biologist Steve Atwood. "We checked 59 parties (10-year average 58) and 121 hunters (10-year average 113). The success rate was 45 percent, which is typical for opening weekend. In total, we checked 12 pronghorn (10 bucks, 2 does/fawns), 1 bull elk, 21 mule deer (12 bucks, 9 does), and 17 white-tailed deer (12 bucks, 5 does).

Thick fog made for tough early-morning hunting in Glendive.

"The fog, combined with mild weather later in the day, made for comfortable conditions to be afield, but many hunters reported that deer weren't out and moving much," said wildlife biologist Melissa Foster.

"We checked a total of 23 parties, and 46 hunters who came through with 15 big-game animals (9 mule deer, 5 whitetails and an antelope)," Foster said. "Several parties were also targeting birds, with mixed results. Many reported lower-than-normal bird numbers, and few young birds, a result of this year's drought."

Foster noted that it's early in the season, and hunters are generally looking forward to spending more days afield in the weeks to come.

Hunters are reminded that stopping at game check stations is mandatory, even if you haven't harvested an animal.

This year, FWP will continue surveillance for chronic wasting disease in Priority Surveillance Areas. In southeast Montana's Region 7, Hunting Districts 700 and 703 are within the PSA. Hunters are encouraged to take advantage of sampling services where they are available. Sample submissions are voluntary, and if hunters visit a sampling location FWP will pay for testing. Hunters also may submit their own samples using instructions found at fwp.mt.gov, but there is a small fee for testing results.

To help prevent the spread of CWD, all carcasses, including the head and spinal column, must be disposed of in a Class II landfill after butchering and processing, or left at the kill site. Dumping carcasses is illegal, unethical and can spread diseases, including chronic wasting disease. This requirement applies to all deer, elk and moose carcasses harvested by hunters or as vehicle-killed salvage.

Hunters can bring their animals in for sampling at the FWP regional headquarters in Miles City from 8 a.m. to 5 p.m. Monday through Friday during the general season. They are encouraged to call ahead (406-234-0900) and make an appointment. Only the head with some of the neck attached is needed for sampling.

The only designated CWD sampling station in the field this fall is at Hysham. Technicians will be running that station on Saturdays, Sundays and Mondays from 10 a.m. to dark. FWP staff may assist hunters in collecting samples at other check stations and locations when time allows. 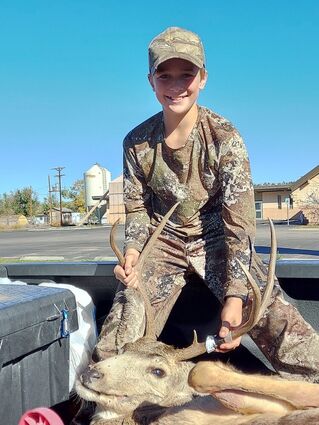 Wesley Buhl, 11, of Billings poses with his buck at the Ashland check station.

All things CWD, including a link for hunters to check their test results and a map of Class II landfill locations, can be found at: https://fwp.mt.gov/conservation/chronic-wasting-disease.