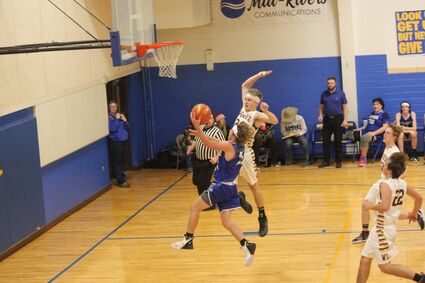 Bulldog Wyatt Melton goes up for two points in Wibaux on December 21st.

CCHS basketball teams traveled to Wibaux on December 21st to take on the Longhorns.

The JV boys won by three points in an overtime thriller as nine Bulldogs scored in the contest. Two players, Jace Pardee and Chace Loehding, finished the game with double-digit points. Blue went 9 of 19 at the free throw line. The game was knotted at 47 at the end of regulation before the Bulldogs outscored the Longhorns 5-2 in overtime. All of the overtime points for both teams came at the free throw line except for one field goal from eighth grader Kaleb Frye.