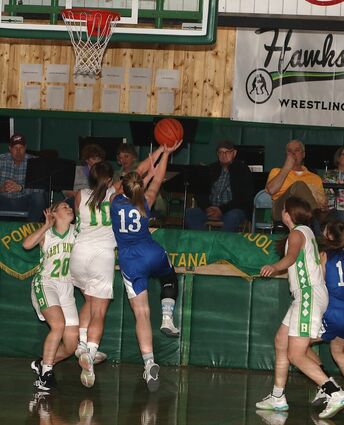 Senior Kenzie Tooke goes up for a layup earlier this season during the Lady Bulldogs' 17-point win at Broadus on January 7th. Tooke had 13 points and 2 rebounds in the contest.

The Lady Bulldogs outscored the Lady Cougars in every quarter to come away with a twenty-six point victory on Saturday in Plevna. Eight of the 9 players suited up for the Bulldogs scored in the contest, led by Heidi LaBree with 21 points. Chloe Tudor had 18 points for Plevna in the loss. LaBree also led Blue in rebounds with 12 and assists with 8.

Fouling was at a minimum throughout the contest. CCHS shot only six free throws, Plevna attempted 8. The Lady Bulldogs also won the turnover battle, 16 to 20, and out-rebounded the Lady Cougars 37 to 21. They shot 44 percent on two point field go...