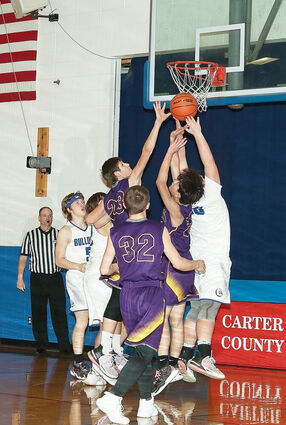 Bulldog Jaden Pardee fights for a rebound amongst a host of Plevna Cougar players on January 29 in Ekalaka.

The varsity Bulldogs traveled to Jordan last Friday for a conference match-up with the Mustangs. The Bulldog offense got off to a slow start, managing only 7 points by halftime. Things changed in the second half as CCHS trimmed an 18-point halftime deficit to 6 by the end of the third. The comeback bid was too little, to late though. They eventually lost by 8. CCHS had 17 turnovers (6 more than Jordan) and Jordan was able to cash in on them, scoring 15 of their 46 points as a result. Jaden Pardee had 12 rebounds and 13 points for CCHS in the losing effort. Turner Tooke added 8 rebounds and...