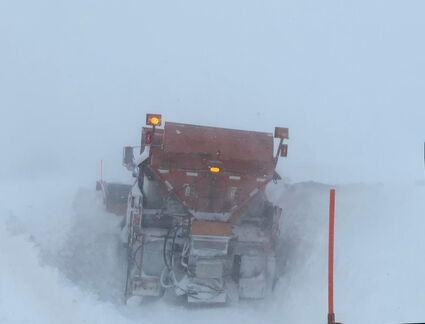 Crews work to clear snow from Highway 7 between Baker and Ekalaka on April 14.

According to the National Weather Service, Ekalaka received 21.5 inches of snow during last week's blizzard. By 5 p.m. on Tuesday, 11.5 inches had accumulated, another 7.5 had fallen by 5 p.m. on Wednesday and Thursday saw 2.5 inches. The snow resulted in 1.41 inches of precipitation.

By 1 p.m. on Wednesday, the Montana Department of Transportation had closed Highway 7 from Ekalaka to Wibaux, as well as Highway 323 to Alzada and portions of Highway 212. Highway 323 reopened on Friday afternoon while Highway 7 to Baker remained closed until around 4 p.m. on Saturday.

Ekalaka Public Schools shutdown early on April 12 and remained closed until April 19. Friday and Monday, though, were already scheduled to be part of Easter break for students.

A spring storm recalled by some locals that took place between April 18 and April 20 of 2006 resulted in 25.3 inches of snow and 3.56 inches of moisture. The low temperature over the course of those three days was 30 degrees, while the low temp throughout last week was 3 degrees.

The spring blizzard that many referenced during conversations about last week's storm, though, was the May Day blizzard of 1967. Snowfall records for 1967 were not available, but on April 30, 1967 Ekalaka recorded 1.53 inches of precipitation and on May 1, 1967 another 1.38 inches fell. The Eagle dated May 5, 1967 reported that between 21.5 and 36 inches of snow fell. Several locals have stated that last week's blizzard was the worst they could recall since that 1967 storm. An archived article from the May Day blizzard of 1967 can be found below.

Any sort of an estimate of the extent of the damage from the storm of April 30-May 1, is probably impossible at this time, as many ranchers do not know themselves what their situation is as of Wednesday morning. A typical answer was from the Sam Tauck ranch at 11 a.m .: "We don't have any idea here at the house-everyone is out trying to see what he can find."

An average of measurements around The Eagle building in Ekalaka indicated 21.5 inches of snow on the level, but Deputy Game Warden Bob May who said he found a quiet spot where the wind had not blown in the Long Pine Hills, measured 36 inches. Both measurements, in town and in the hulls, were taken after the snow had several hours to settle.

The storm began Saturday night in earnest and increased in intensity Sunday, tapering off late Sunday night. By Sunday mid-day, streets in Ekalaka were impassable for anything on wheels.

The moisture reading at Ekalaka Sunday afternoon indicated 1.53 inches of precipitation. Another 1.38 inches was measured by Monday evening, and another .19 inches of moisture fell in the form of snow on Tuesday, so that at present Ekalaka faces a prospect of whatever happens when the 3.10 inches of water laying around on the top of the ground turns into liquid and starts to run.

As Sheriff Vernon Preuss said Tuesday, "There isn't anything that can be done about a flood right now, but now is the time to worry about it."

Schools were closed Monday, but began classes Tuesday for the students able to be present.

Some concern was felt for 15-year-old Mike Moullet and his 10-year-old brother, Pete, who were stranded at the Bud Moullet ranch over the week-end where they were looking after livestock after their father was hospitalized at Miles City, and before the family could reach home.

The boys contacted neighbors, Tuesday night, and were all right.

Mr. and Mrs. George Cleveland, both in their seventies, had a narrow escape Sunday when they attempted to go to their ranch in the Chalk Buttes area via Jeep. They left town before the storm started, but soon the visibility was so bad that they had trouble seeing and ran off the road at Stoltenberg hill. Unable to get the vehicular back on the road, they spent Sunday and Sunday night in the Jeep before attempting to reach help. The Clevelands suffered from exhaustion but with the help of Tim Fix were able to reach the Fix ranch where they rested and were brought to Ekalaka Tuesday evening. 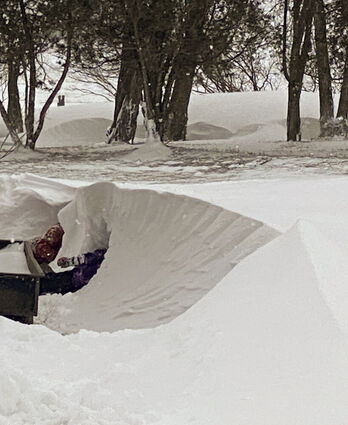 Children tunnel through a snowdrift in Ekalaka on Thursday afternoon.

Mr. and Mrs. Larry Woolston spent from 8 a.m. one day to noon the next day in their pickup near Hammond, when they attempted to get Mrs. Woolston to a hospital for medical attention.

Snow removal efforts on roads were hampered at first by the unexpectedness of the situation, which found most county road equipment at Hammond, and separated by impassable roads from the snow removal attachments at the county shop in Ekalaka.

No effort was possible to save a portion of the roof at the old New Life Dance Hall, which collapsed sometime Sunday night after the proprietors, Mr. and Mrs. Clayton Holly, closed up at 7:30 and went home in the storm. The collapse was not unexpected, as the timbers were seen to be weakening under the weight of the accumulating snow.