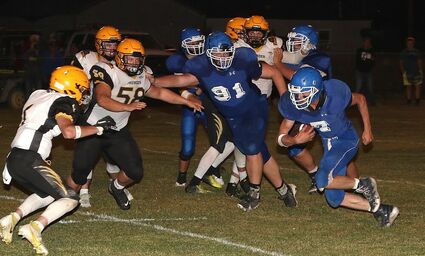 Cardell Laughery runs the ball during the Bulldogs' overtime victory over MonDak.

It wasn't the prettiest game - there were too many fumbles to count - but the CCHS Bulldogs got their first win of the season, and fans truly got their money's worth in what was perhaps a game for the ages at Rowley Field on September 16th in Ekalaka.

Blue was moving the ball at will on the ground early, ripping off several runs over ten yards and averaging over 5. They went up two scores in the early going, and it seemed as if the game was in hand.

The MonDak Thunder didn't give in though, and scored twice to tie the game at 14 with around 3:30 left to go in the first half. Blue had a chan...