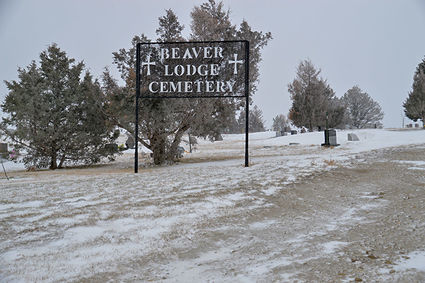 The Beaver Lodge Cemetery, for unknown reasons, again faces the loss of quite a few cedar trees within the cemetery. A number of them have been removed and more are in the process of dying. Members of the board planted trees in 2017, and found it rather challenging, especially since the new water line was not installed at that time. Therefore, water was hauled.

The junipers that were planted did not take, but the oak and ash trees seemed to fare quite well. It seems deer have taken a liking to the new trees so cages have been put around most of them. Board members hope for a moist year in 2018 instead of a drought. The steel posts for the cages were all donated. Quite a bit of the material used around the trees was recycled but some was purchased.

Even though there was not much grass to mow in 2017, it seemed weeds were plentiful and required a lot of attention. There was one volunteer that helped mow before Memorial Day and after. Two others came once to help with the work. The Puptown Wranglers 4-H club did a great job picking flowers before Memorial Day again this year.

Because of continued drought, some cemetery projects have been put on hold. One such project is putting pavers around the circle and around benches.

The pledge drive was well responded to last year with 36 people making pledges. This year eight people followed through with their pledge. There were quite a few "In Memory Of" donations. The association was still "in the black," financially, this year. All the generous donations and memorials are greatly appreciated and will help financially in the future.

The board was very grateful to have several new people step up and take positions. Again, it would be nice if others took an interest in the cemetery and other organizations, so that when those filling the positions currently are old, tired, or wore out, someone will be ready to step up.

There were 17 burials and cremations this year.

The board thanks all the contributions, donated posts, and volunteer work for the cemetery, as well as the constructive criticism, comments, and compliments.