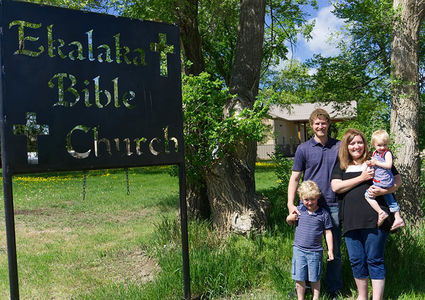 Last Friday, Pastor Jon Champlin's family and members of his congregation threw him a surprise birthday party. His wife, Kati Champlin, says he caught on after becoming suspicious of why she was cooking six-pounds of meat.

The Champlin family is celebrating another milestone this week: their one-year Ekalaka anniversary.

Champlin is pastor of Ekalaka Bible Church. He and his wife have two children, both with straw-colored hair, Liam, who is very polite, and Evangeline, who is too young to need manners.

The couple met at Frontier School of the Bible in La Grange, Wyoming while serving toge...