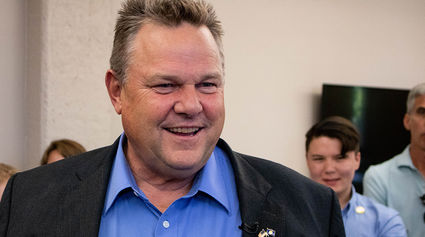 U.S. Sen. Jon Tester, who is seeking a third six-year term, talks to a constituent during a September gathering in Missoula.

Jon Tester worked his way down a row of eager union members, shaking hands as he went. His battered pair of dusty cowboy boots a sharp contrast with the button-up dress shirt. Even his outfit sends the message that he is both a politician and a farmer. He's counting on his homesteader history to set him apart from his opponent, Matt Rosendale, in the 2018 elections.

"I was born and raised here," Tester said after the Great Falls event. "I've made a living in rural America. From the time I got out of college until today I've been in some form of public service."

It's a difference he hopes will earn him a third term in the U.S. Senate, despite an intense national spotlight made brighter by the efforts of the U.S. President to defeat him.

Tester gives the impression of a politician you could have a beer with, and the Montana Carpenters Local 82 in Great Falls planned to do just that. Tester made his way to the icy keg and a bright red Solo cup found its way into his hand.

A crowd of about 30 men and women clad in primarily blue jeans and cowboy boots wait eagerly to hear Tester's strategy to combat a recent Supreme Court decision that prevents public unions from collecting fees from non-union employees. The ruling did not directly affect the carpenters union, but some fear the decision will eventually trickle down to labor unions.

"Union contractors can come in and don't have to pay dues and the whole thing starts to crumble," said Rick Hertz, a carpenter in Belt, Montana. "I need to know what does (Tester) believe."

Tester answered with specifics, talking about openings on the National Labor Relations Board and his plan to play a role in filling those seats.

"There's some opportunities around the Labor Relations Board to get more people on there that actually understand labor, because right now I don't know if they do. In fact, I would say they don't," Tester said.

Tester's re-election strategy pivots on answering and tackling specific problems. It's a strategy he plans to follow up until election night.

The two-term senator is aided by a huge campaign warchest of nearly $12 million, which has prompted some to criticize the fact that he has accepted more money from lobbyist than any other member of Congress. But he also faces intense pressure from Republican groups that are pouring money into anti-Tester ads and a president who has made multiple trips to the state to campaign for Republican Matt Rosendale.

Still, on the trail, he talks issues, outlining opportunities to lower costs of prescription drugs through transparency bills to create generic drug options for the public. He plans to put pressure on the federal government to provide funding for hospitals, particularly in small communities.

He also focuses on specific policies in Washington that may affect Montana. Many Montana farmers are concerned about the increased tariffs President Trump has imposed on trade with China. China was number three on Montana's top goods exports list in 2017, sending out $110 million worth of oil seeds and grains to the region, according to the U.S. China Business Council.

It's an issue that comes up on the trail and one that at moments Tester appears at a loss to answer. He pointed out he backed Republican Sen. Bob Corker's bill to take back some of the power from the executive branch but the bill did not pass.

"On one hand, the president is right, China has been a bad actor," Tester told supporters in Great Falls. "They've done some currency manipulation, stealing trade secrets, but on the other hand these tariffs require people to pay taxes in both directions. In the end, all I can do is try to influence the President and the administration about what's going on in rural America."

"Higher education is one of the key drivers in whether you're going to be able to take advantage of the American dream," Tester said. "Or else you're going to have to work 2 or 3 jobs."

But even as he hits the pro-union messages in Great Falls or the student-focused issues in Missoula, central to his pitch is his local roots. At every turn he seeks to differentiate himself from Rosendale, who moved to Montana in 2002 from Maryland.

"Community is part of what rural America is," Tester said. "I'm doing what I need to do to make my community a better place. This is the fabric of our society, it is what we are. That is why I'm so passionate about helping it."

This story was produced by the Community News Service, a service of the University of Montana School of Journalism. Please contact student reporter [email protected] if you have questions.