By Rick and Susie Graetz
University of Montana 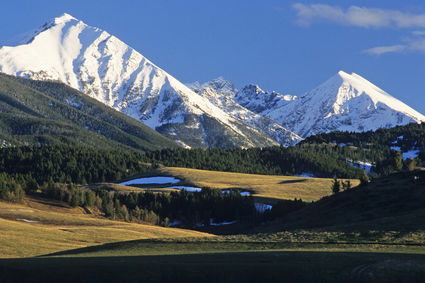 The Spanish Peaks have changed little since Lewis and Clark first saw them.

An important portion of The Corps of Discovery's journey occurred in southwest Montana. On July 19, 1805, Lewis and his men were struggling up the Missouri between present-day Upper and Lower Holter lakes. "from the singular appearance of this place I called it the gates of the rocky mountains." The next day, searching for "the three forks of the Missouri," they entered the first of southwest Montana's big valleys – Helena's Prickly Pear Valley.

Arriving at the meeting of the rivers on July 27, Lewis stated, "the country opens suddonly to extensive and beatifull plains and meadows which a...