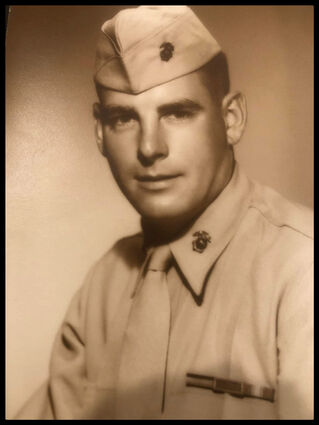 Richard Delano "Dick" Peterson passed away peacefully in his sleep on his ninth day in Hospice at Holy Rosary Residential Living. Dick was born in Mill Iron, MT at the family homestead on January 15th, 1934. He was the youngest child of Louis O. and Anna M. (Hodson) Peterson. He joined older siblings Louis (Bud), Carl, Virginia (Kip), Dan and Eleanor. Dick grew up and attended elementary school in Mill Iron.

When he reached high school, he and his mother moved to Ekalaka, so he could attend school there. He was proud to be a Carter County Bulldog, participating in football, basketball and track. He tried to play the clarinet and cornet in band, but he later confessed he had no ear for music. He graduated in 1952 and enlisted in the Marine Corp in 1954. This was the beginning of 40 years of service to his country.

Dick graduated boot camp at Camp Pendleton, San Diego, CA and went overseas to attend winter training at Camp MT. Fuji, Japan. He was stationed in Okinawa, Japan and later at Kaneohe Bay, Hawaii. Honorably discharged in 1956 with a 6-year extension, he joined the Montana National Guard serving a record 38 years. He loved being in the National Guard and never complained about his duty weekends or the yearly 2 weeks of summer camp. His duty took him to areas across Montana and the Western United States along with a month-long tour of duty in western Germany. He developed many lifelong friendships along the way.

He moved to Miles City in 1956 and worked for Beacon Carter Service and Nance Motors. In 1956, while out dancing he met a young lady named Lucy. They courted and he married Lorraine (Lucy) Hodgson on June 21st, 1957. They welcomed daughter Tanna (Pumpkin Head) in April 1958 and son Mark (Tadpole) in May 1960. Thinking the family was complete they moved the house on North to Jordan and daughter Kristi (Puddin) came along in May of 1969.

Dick was a mechanic at Deluxe Motors for almost 20 years, known for being good with transmissions and carburetors. With the automotive industry changing to electronics and computers, Dick did not want to relearn his trade, so in 1980 he started work in the maintenance department at the Montana State Highway and later at Friendship Villa. In 1989, he started at Holy Rosary Hospital, dedicating 20 years of service, retiring there at the age of 75 in 2009.

Dick, a quiet man, enjoyed working in the garage and in his large, beautiful garden. He was well known for always sharing his garden produce with family, friends and neighbors. He enjoyed visiting with folks over a cup of coffee at the kitchen table and if anyone needed help with anything he would be the first to offer. Dick was also a favorite grandpa to all the family and neighborhood pets, and they all loved to visit his house for an always available treat.

In August of 1996, his wife Lucy passed away suddenly, and he has missed her immensely these last 26 years. He is also preceded in death by his parents, brothers Louis (Bud) and Carl, sister Virginia Jardee, sisters-in-law Norma Jean Peterson and Elizabeth (Betty) South, brothers-in-law Clifford (Cliff) and William (Will) Hodgson and nieces Wendy Hodgson and Joanie Gunther.

Special thanks go out Jackie Bremer, Council on Aging, Wel Home Care and VA Services of Miles City for helping Dick stay in his home until April of this year. Also a special thanks to Tom and Lola Carlson for being great neighbors and helping Dick.

Please make any donations to the Custer County Fund for Animals for their spay and neuter program.

To leave condolences for the family please visit Stevenson & Sons Website at: http://www.stevensonandsons.com.