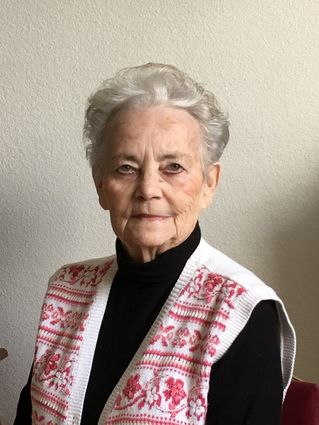 Lois was born July 17, 1930 to Frederick "Fred" and Florence Hall in a small farm house north of Miller, SD. She was the youngest of 3 siblings. Her childhood was spent riding horses and helping her dad work the farm. She attended high school in Miller, SD and following her graduation worked in Sioux Falls, SD as a cashier/bookkeeper.

She returned to her parent's farm after the tragic death of her brother, Lowell. Lois met, and married, John "Jack" Stroppel in 1949, eight children were born to this union. They owned and operated Stroppel Hotel & Hot Mineral Baths in Midland, SD until 1960. Lois and the family then moved to Rapid City, SD until 1966 before moving to Billings, MT. Following her divorce she married Jack Mitchell in 1969 and they had one child. Lois and Jack lived in Montana, Arizona, Nevada, Oregon and finally settled back in Billings.

Lois' life was dedicated to her Catholic faith, family and friends. She enjoyed cooking and entertaining, but her greatest delight was spending time with her grandchildren and great-grandchildren. She enjoyed all animals, especially her feathered friends that brought her joy and contentment.

In lieu of flowers, donations can be made to Dahl Memorial Healthcare and/or RiverStone Hospice Services.

Lois will be especially missed by her family and friends and all can be comforted with the knowledge that she is with the Lord.

Arrangements are in the care of the staff at Dahl Funeral Chapel and a memorial service will be at a later date.