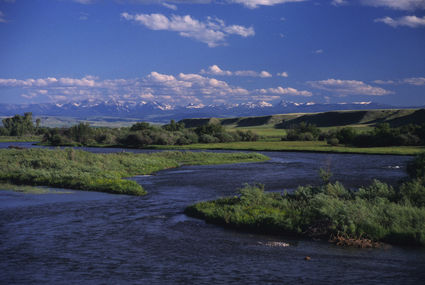 The Madison River near Three Forks flows toward where the Missouri River starts with the Montana's Spanish Peaks in the distance.

When the Corps of Discovery returned to St. Louis in September 1806, fur trappers already were on their way to the new country. In North Dakota, after meeting a group of trappers heading upriver, the Corps' John Colter left the expedition and returned to the country he fondly recalled. In 1808, Colter and John Potts were trapping at the three forks when they encountered Blackfeet hunters and warriors. Potts was killed, and Colter was given a chance to escape. The Blackfeet took his clothes and allowed him to run for his life. Grabbing a spear from his closest pursuer, Colter was able to mak...