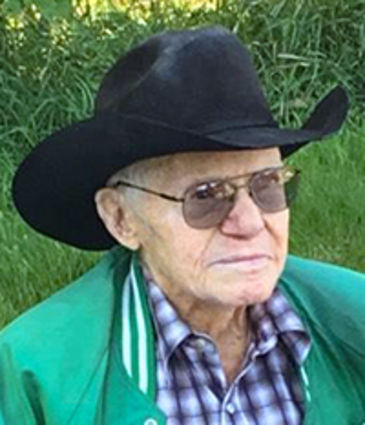 H.B. was born September 3, 1919 in Ridgeway, MT to Robert and Aleta (McDaniel) Burch. He completed 8th grade at a country school in Ridgeway. He served in the United States Army during WWII.

H.B. married Edna "Eddie" Jackson February 3, 1945 at Yuba City, CA. He brought Eddie back to the Tri-State area where he ranched until 1980. They retired to Safford, AZ where he worked as a silversmith and goldsmith making jewelry. They returned to Spearfish in 1999 due to Eddie's failing health. During her final years, H.B. dedicated himself to her care until she passed away in 2004.

After Eddie's passing, he took up his old hobby of tooling leather. He was a people person and an animal lover. He loved music, played the guitar and harmonica and would hum while he worked on leather.

He was preceded in death by his wife, Eddie; son, Gary Burch; siblings, Gladys, Ellis, RO, Harold and Lahoma.

Visitation will be held one hour before services at the church. Funeral services will be held Thursday, June 13 at 10:30 a.m. at the First Congregational United Church of Christ in Belle Fourche. Interment will follow at Black Hills National Cemetery near Sturgis.

The family suggests memorials to the Shriners Hospital for Children.

An online guest book is available at klinefuneralchapel.com.