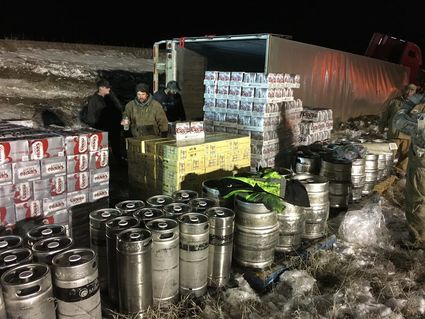 A truck carrying forty-two thousand pounds of beer was on its way to Sidney when it wrecked just a few miles north of Ekalaka last Thursday. Plains Towing and Recovery out of Belle Fourche was on scene with a semi, skid-steer, two wreckers, a flatbed trailer and a recovery trailer to cleanup the wreckage. Even though the company had multiple employees on scene, several locals also assisted.

The wreck involved only the semi, which came to rest after taking out a fence on the east side of the road. Most of the beer was unloaded from the trailer, which was on its side, by hand. An assembly li...