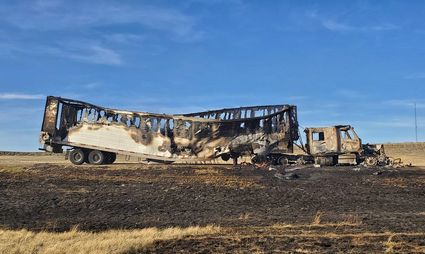 The hulking skeleton of a semi lies along Highway 212 near the pumping station between Hammond and Alzada, in the picture above that was taken April 2. Reports indicate a blown tire started the fire, which then consumed the truck and trailer along with four acres of pastureland before the flames were stopped by Alzada Volunteer Fire Department and local ranchers. The trailer was hauling beef and chicken. There were no reported injuries.