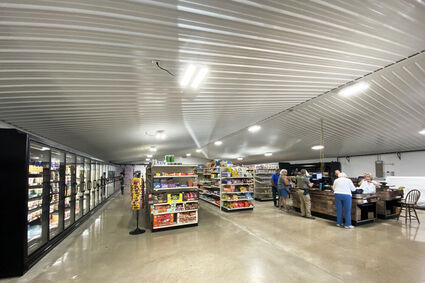 Customers stand in the check-out line at Ijkalaka Grocery on Tuesday afternoon. The main street grocery store officially opened for business this week and saw a steady flow of foot traffic throughout the day.

Back in March, the Eagle reported on what would be the newest addition to Ekalaka's Main Street.

The much anticipated opening of Ijkalaka Grocery took place on Tuesday.

At an impressive 5,200 square feet, the brand new grocery shares its name (Ijkalaka) with the town's namesake, Ijkalaka Russell, a native Sioux who was the wife of David Harrison Russell.

According to store employee Dylan Mulkey, there was a steady flow of customers checking out the new digs throughout Tuesday morning and afternoon. Many were filling shopping carts while others had only stopped in to take a quick look and sa...