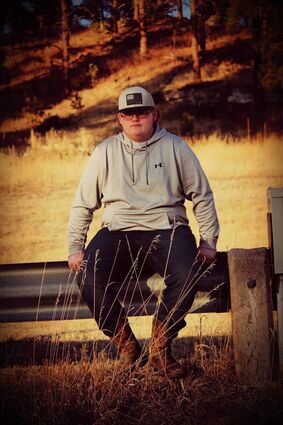 A celebration of life for Kaden Montgomery, 19, of Ekalaka, will be 1 p.m., Friday, March 25 at the Carter County High School Gymnasium in Ekalaka. Burial will follow at Beaverlodge Cemetery.

Visitation for Kaden will take place from 11 a.m. to 1 p.m. at the Carter County High School Gymnasium.

Puddin Montgomery, or as some may know him, Kaden Christopher Montgomery was born on March 11, 2003 to Chris and Courtney Montgomery in Angola, Indiana.

As a baby, Kaden was just the sweetest. He was always a happy, smiley fella. When he became a toddler was when his parents first realized this kid was going to be a hell raiser!

He was always doing the craziest things. Driving his power wheels into bushes with his little sister riding along. Ramping his bike. Playing war with his nerf gun arsenal. Doing anything he could to annoy his siblings and give his parents heart attacks. On the complete flip side, he was also the sweetest, most caring, loving little boy. He never lost that as he grew into an adult. Although, he never lost the hell raiser side either!

As Kaden grew into his teen years, he started to turn into the Puddin everyone came to know and love. He practically lived at the Fix ranch and definitely upped his daredevil game. He would take any bet whether he stood to gain anything or not. That's how he got talked into bull riding. On multiple occasions when nobody was offering a crazy bet, he would go up to people and say "Hey, if you give me a dollar, I'll eat a worm." He was always looking to make someone laugh or to give someone a story they'd always have to tell about him.

Puddin attended and graduated from Carter County High School in 2021. Anyone that knew him, knew the only thing he liked about school was giving all the teachers a hard time. He played a few sports over the years but he would've rather been out doing crazy stuff and living life. He played football his senior year because the football coach was finally able to talk him into it after seeing a video of Puddin flipping a big, round hay bale end over end.

After high school, Puddin went to work in Miles City doing masonry work for some good friends. When work died down in the winter, he did some odd jobs until finding a spot with Choice Construction in Baker. He sure did have some great stories from that one! Puddin was never the career type. He just needed to make enough money to support his crazy adventures.

Puddin was a one-of-a-kind soul from the beginning. He was a mama's boy, dad's sidekick, and sibling protector and he was so excited to become Uncle P in just a few short weeks. He made a lasting impression on everyone he met. There's not a person that met him, even if only for a minute, that doesn't have a funny or crazy story with him. He lived life to the fullest until the very end. He was loved more than he could've ever known. Life will always be a little less exciting without him.