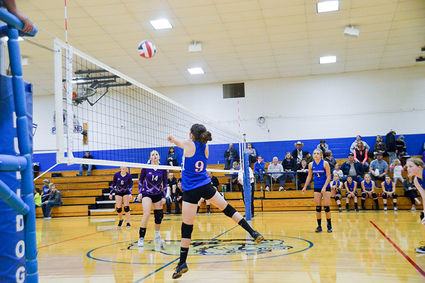 Tylee Loehding during junior varsity action against Terry last Saturday. The JV girls comfortably beat the Terriers in the first two sets of the match, but had to rally in the third, eventually coming from behind to win, 17-15.

Last Friday CCHS Volleyball traveled to Jordan to take on the Garfield County Mustangs. The girls handily won the match in three sets, Claire Callahan led the team in kills and blocks, teammate Hannah LaBree led the team in aces, and Tori Tooke led the team in digs and assists.

On Saturday at home, the...