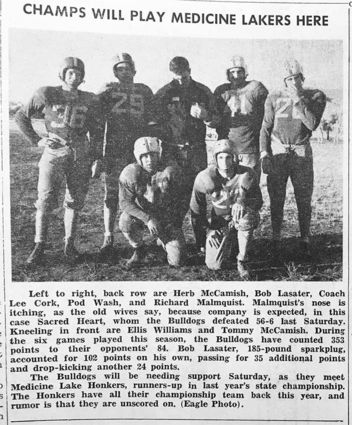 The clip above was taken from the November 13, 1953 issue of the Ekalaka Eagle.

On November 14, 1953, CCHS football won the Eastern Montana C Football Championship, completing the team's only undefeated season. That year, there was no six-man state championship. The game was played in Ekalaka, as was the divisional championship played the week before against Sacred Heart, which CCHS won 56 to 6.

According to local historian Ernest Tooke, the day was warm, somewhere around 70 degrees Fahrenheit. Multiple players from that team also went on to play college ball. The full story from the November 20, 1953 issue of the Ekalaka Eagle can be found below.