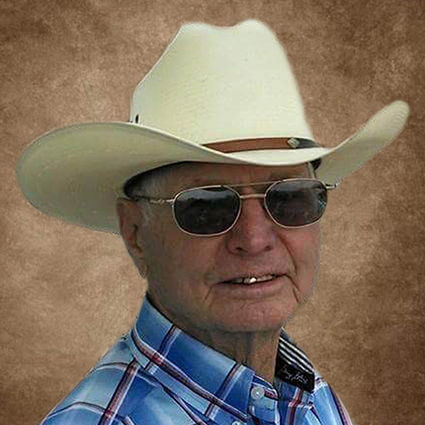 Ping passed away on Saturday, December 30, 2017 at his home west of Baker.

Glen "Ping" Hurley Askin was born in a log cabin south of Ekalaka on November 11, 1932, the son of Henry "Hank" and Marguerite (Husted) Askin. Growing up he attended grade school in Ekalaka and his high school days were in Ekalaka and Ismay, where he graduated with the class of 1952 after taking two years off to help on the ranch. Following graduation, Ping enlisted in the US Army where he served in a horse platoon in Berlin, Germany.

Following his honorable discharge, he returned to Ekalaka and married Gloria Olson on January 15, 1956. Their marriage was blessed with five children. Ping worked in plumbing for Don Morrow and HVAC for Duane Rindy before moving to the ranch near Ekalaka in 1959. He ranched until 1965, then Ping and Gloria moved their family to Las Vegas. He worked there as a Black Jack dealer at the Fremont and the Hilton.

In 1981, they moved back to Baker where he filled his days with raising quarter horses. He was a skilled welder and leather worker. Ping also delivered rural mail for 25 years, retiring in 2006. You could always count on Ping to be on time. He enjoyed riding and working with the horses, leatherwork and rawhide braiding, fishing, dancing, Hank Thompson music and crossword puzzles. Ping especially loved his grandchildren and great-grandchildren and following their activities. He had a wonderful positive effect on countless children that he cared for over the years. Ping will be missed by all those who knew him.