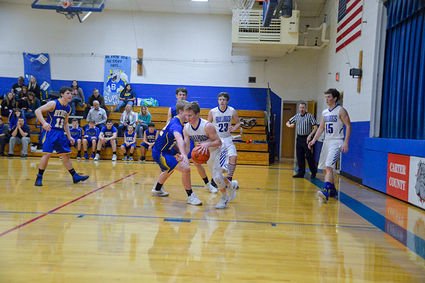 Max Larson drives past a Custer/Hysham defender while teammate Jared Pardee looks on last Tuesday in Ekalaka. The Bulldogs defeated the Rebels 73-67.

CCHS Boys Varsity narrowly pulled off the win against the Custer/Hysham Rebels last Tuesday. The game was pretty close throughout. Both teams had similar numbers in rebounds and turnovers. Shay Adler for the Rebels put up 27 points, slightly out-dueling Caleb Fix from CCHS who had 25. Fix got really hot in the second quarter and continued his shooting partway into the third quarter. He ended the game with five 3's. Mick O'Connor played a very solid game inside, scoring 20. He also went 6-7 from the free throw line.