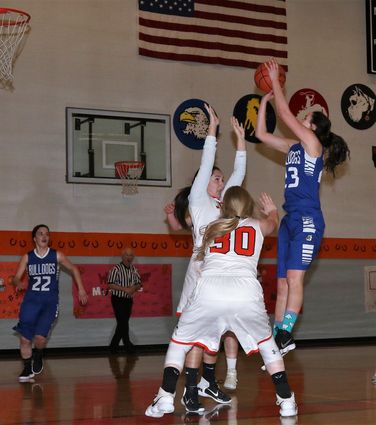 Claire Callahan attempts a jump shot over Mustang defenders during the Bulldogs' impressive 41 point victory over the weekend.

The CCHS Lady Bulldogs scored 35 points in the first quarter against Plevna en route to a 48 point victory last Friday. The Cougars scored only 2 in the first, and 20 for the game. CCHS out-rebounded Plevna 28-5, had 15 fewer turnovers and totaled 22 steals. They shot 55 percent on free throws, 50 percent on two-point field goals and 56 percent on three-pointers. Codi Melton led the team in rebounds with 4. Thirteen Bulldog players scored, led by Whitney Kittelmann and Heather LaBree with 10 a piece.