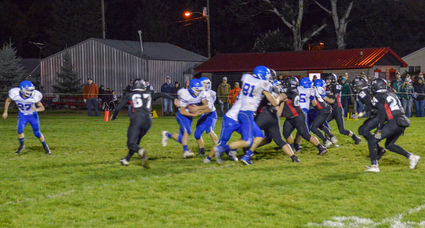 The Bulldog offense runs an option play in the second quarter of their game at Park City on Friday.

CCHS played in cool, wet conditions against the Panthers in Park City on Friday night.

The Bulldogs received the opening kickoff and scored on their third play from scrimmage. The score came on a 40 yard play action pass from Turner Tooke to Mick O'Connor. O'Connor was wide open a few yards past all of the Panther defenders. Blue added the two-point conversion on a run.

Park City wasted no time on their first score either. After an out-of-bounds Bulldog kickoff, Garrett Zimdars took the next kick back 65 yards for a score. Park City failed to convert their two-point conversion attempt.