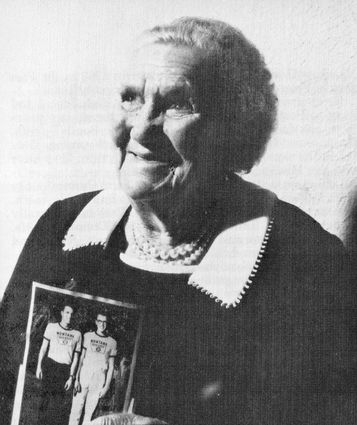 My last article told of the Donald family building two houses to accommodate the growing family which now amounted to twelve children. The second house had four rooms built in an "L" shape, built out of hewed logs.

Jessie May (daughter) gives information and "highlights" of the Donald life on the homestead in the Ridge community which i would like to share.

"My dad enjoyed farming and working with horses. He planted feed crops, oats, and corn. He would tell of the first time he and a neighbor Joe Hayes planted alfalfa. They did it with a hand seeder."

She explains how they experimented in a large building trying to coordinate the speed on the crank of the seeder and their steps to the proper space. After the experiment they went to the field and took turns walking in the crop.

Mrs. Donald was left alone with the children as George and Grandad Scotty Taylor would bring supplies out of Belle Fourche, South Dakota. As I read this I thought to myself, "that's quite a distance to travel with teams and a wagon." Jessie May doesn't say how, when, or where Grandad Scotty got to the Ridge area. As Mrs. Donald was a Taylor, this must have been her dad.

"Mom was one of the Midwives of the area and also attended the sick. When called upon, would help in preparing the deceased for burial."

As any rancher in Carter County knows, it was difficult to make a living on small acreage and the winters would cause the livestock losses because never there was never enough hay for the cows. The ranchers started to bring in sheep. This was a new industry for the Donald family but it provided jobs for herding, sheering, and lambing those sheep. If the owner didn't have enough money for wages, they worked for their room and board and experience.

That's hard to even think about but money and jobs were scarce back during those years.

"A large field of potatoes was planted, hoping to get enough for the family to use and to sell or trade, several milk cows to milk twice a day, and a large garden to care for. Gathering the wild fruit was a day we enjoyed. Mom would prepare a picnic meal and we would load the tibs, buckets, and pasteboard boxes into the wagon and go to the fruit groves in the East Fork Brakes. The Christmas tree was brought in on Christmas Eve and decorated with homemade ornaments. A few days of the summer were spent at the Caldwell Springs Bible Camp."

Just think: No T.V. to watch and no SmartPhone to keep the fingers busy.

Another memory of Jessie May: "Dad always did his farming with horse drawn equipment, and also haying. In my lifetime the lead horse was a large white with gray specks, we called him Kernel. He would come to Das's whistle and Mom's call of "here Kernel", but us kids could never catch him.

As I wrote in an earlier article that the Stan Wells family on Boxelder had such a horse when I worked for them.

Tragedy came in 1930 when their home was lost to fire and Lem died in 1932. The home was rebuilt by George and the two youngest boys, but two miles from the original home site.

Well, what else happened to the Donald family? We will discover this in the next article.