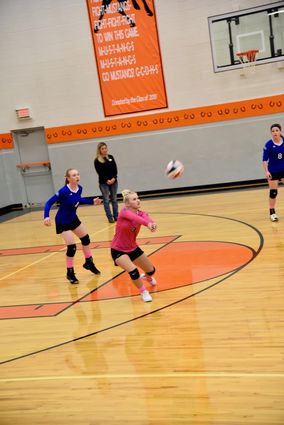 Last Friday at home the CCHS varsity volleyball team defeated Broadus in three straight sets. The Dogs won the first set, 25 -19, the second 25-20 and the third 25-17. As a team, the girls had 10 aces, 33 kills, 37 digs and 28 assists. Whitney Kittelmann led the team in assists with 18 while sister Kari Kittelmann totaled 11 digs. Heather LaBree led in aces with 3 and Hannah LaBree led in kills with 7. Kenzie Tooke had Blue's only block.