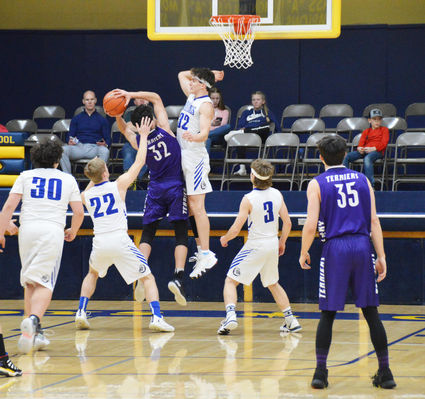 Mick O'Connor goes up for a block during the Bulldogs' game against Terry at the District 4C Tournament. The Bulldogs lost the contest, 42-47.

The Bulldogs opened their District 4C Tournament play against Northern Cheyenne. Blue started slow and had only a one point lead after the first quarter, but put up 21 points in the second to take a 12 point lead at halftime. After halftime, Blue continued to pull away, outscoring the Eagles 36-18 in the final two frames.

CCHS shot 13 for 18 from the free throw line. They had 19 turnovers, Mick O'Connor was the games leading scorer with 26 points. Shayne Enos finished with 18.