By courtesy of Fallon County Times 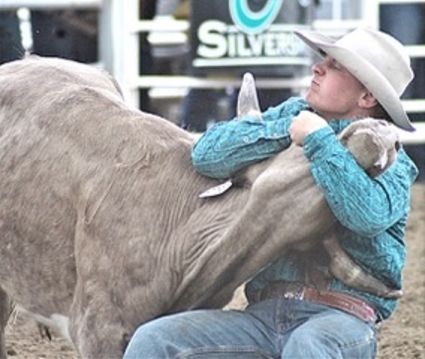 After a season cut short by a global pandemic and state closures of public events, the Montana High School Rodeo Championships closed the 2020 season in style in Baker Saturday.

And they finished the multi-day event just in time to avoid a cloudburst that drenched Fallon County in the late afternoon Saturday.

At stake were berths in the national prep competition in mid-July at Guthrie (Oklahoma).

The week of rodeo started off Tuesday with cow cutting events at the nearby Graham Indoor Arena.

It ended Saturday with only one rider succeeding in staying on a bucking bull long enough to score in the Short Go.

By the end of the week, Baker competitors claimed one title.

In Bull Riding it was Havre's Cole Hould who succeeded and survived Ethan Marceau's try on the final bull of the day to claim the win Saturday. Hould came into the championship with 55 season points, behind Marceau's 68 and Caden Fitzpatrick's 64.

However, it was Hould who took best advantage of his stay in Baker, winning the 1st Go with 72 points, then followed it up with 79 points in the 2nd Go and icing the championship with his win Saturday in the Short Go. That gave him a total of 135.50 points.

Marceau finished the competition in second with a total of 118 points while Fitzpatrick was third with 94 points.

Baker's Colton Turbiville of nearby Rhame (N.D.) was the first to claim a state championship with a win by one point in Wednesday's cow cutting finals. He won the 1st Go with a score of 142, then placed second in the 2nd Go and was third in the Short Go.

But Turbiville finished the competition with 140 points to edge Nathan Ruth of Big Timber by one point after leading him by three season points going into the championships. Roan Burrows of Miles City placed third in the championships with 134 points.

In the Reining Cow Horse competition, it was Chalee Harms winning a second state title with a score of 135, while Orahood was second and Reyna Warneke of Great Falls was third. Meged was fourth, just ahead of Turbiville and Mattie Mastel of Marmarth.

In the Breakaway, Harley Meged of Miles City won the state crown by a one-point margin over Murphy Gaasch of Dillon. Marmarth's Mattie Mastel placed sixth, ahead of Chalee Harms of Miles City.

In the Steer Wrestling, Jacob Wang of Baker had to settle for second while Jaden Whitman of Belgrade got the win. Whitman came from behind to win the title with victories in the 1st Go and Short Go. That helped him edge Wang by four points. Brennan Graham, a CCHS student, was third. Kyler Afrank of Baker placed fifth.

In Team Roping, the tandem of Luke Murphy (Helena) and Trace Fuller (Bozeman) took the top honors, edging ahead of Cole and Clay Helm of Miles City.

Alexis McDonald of Gardiner won the Barrel Racing Saturday, beating out Mckenna Schroeder of Missoula and Cheyanne Carl of Ballantine. Lacy Lawrence of Jordan was fourth.

Mary Gibson of Havre, Manchi Nace of Laurel and Mylee Welch of Joliet were the top three finishers in Goat Tying.

In the Pole Bending competition, Dalaney Scafani of Whitehall won all three rounds at state to grab the state title, while Meged was second and Braleigh Garrett of Butte came in third.

In the Tie Down, it was Luke Murphy of Helena beating out Cole Helm of Miles City for the state crown. Garris Robertson of Whitehall placed third, ahead of Bozeman's Trace Fuller. Turbiville was sixth.