By Eric Dietrich and Brad Tyer

How, where, and why Montana became the grayest state in the West 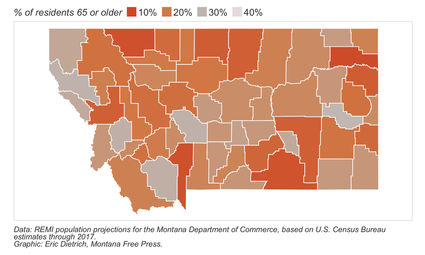 by Eric Dietrich and Brad Tyer

People have been parsing the human lifespan into a taxonomy of ages forever. Aristotle proposed three categories: youthful, prime of life, and elderly. Two thousand years later, Shakespeare's Seven Ages of Man carved human chronology into seven slices, with the body's final frailty circling back to the original oblivion of infancy. And in the 1980's, British historian Peter Laslett proposed a revised map of three ages, with a caveat for the third: it could be a time of post-retirement fulfillment and achievement, or it could collapse, a la Shakespeare, into d...