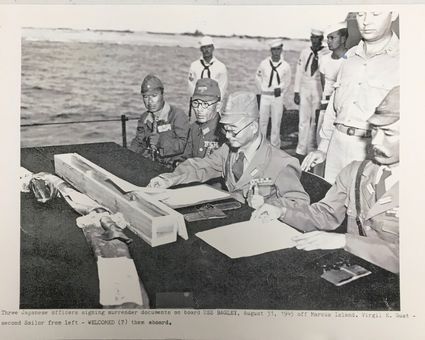 Three Japanese officers signing surrender documents on board the USS Bagley, August 31, 1945 off Marcus Island. Virgil E. Gust, second sailor from the left, welcomed them aboard.

I always marvel at the connections I make with people from around the country and the world through writing a humor/recipe column. One day while sitting in my County Superintendent's office, I received a call from Don Williams of Eugene, Oregon. He was researching his relative, Violet Widdecombe, who taught in Sweet Grass County decades ago. After several conversations and emails, we have become e-pals. He was particularly interested in my recent column on Virgil Gust, because he remembered visiting Gust's Department Store in Big Timber as a child. He went on to research Virgil, and he has shared part of his research with me this week, which just happens to be the week that beloved business man and colorful Big Timber resident Virgil Gust turns 100 years old.

Don writes nostalgic and historic pieces for The Chronicle in Creswell, Oregon. His article about Virgil is entitled "Some Nostalgia and the Story of a Ship and a Man Who Served on that Ship in War Time." I would like to thank Don for allowing me to share this abridged version of his story in honor of Virgil's 100th birthday this week: "I contacted Virgil Gust by letter regarding the Destroyer he had served on during WWII, DD386, the USS Bagley, and I was delighted in a phone call a week ago from Mr. Gust, answering my letter asking for information on his store and his service record on a famous war ship."

The USS Bagley is one of eight of the Bagley Class of Destroyers. The Bagley class ship was named after Naval Officer Worth Bagley, who was killed during the attack on the battery at Barbenaf, Cuba, on May 11, 1898. He was the first to lose his life during the Spanish American War. The Bagley class had a speed of 35 knots, two forward cannons and one rear deck cannon, numerous 50 caliber machine guns mounted on both sides and on the tail fin (namely for repelling aircraft), and they were used for surface battle as well.

Virgil Gust was on board the USS Bagley, and he was Officer of the Deck the day the Japanese Navy Commanders signed the surrender of the Japanese armed forces on the deck of the Bagley. The Bagley served as Flagship for Rear Admiral F.E.M. Whiting, USN, on August 31, 1945. He accepted the surrender of the Mercus Island Japanese Navy. The ceremony took place on the forecastle with the ship lying at anchor off Mercus Island.

On September 5, 1945, the Bagley reported to commander of the Fifth Fleet for duty and joined Task Force 55 in Okinawa on October 8, where the Bagley participated in the landing of Occupational Forces for that area during the period of Sept 22-25. The ship remained on Occupational Duty till November 1, 1945.

The formal declaration of unconditional surrender was signed September 5, 1945 on board the Battleship Missouri, in Tokyo Bay. The Supreme Commander of the Pacific Operations, Douglas MacArthur, had full authorization by United States President Harry S. Truman, to sign the Japanese surrender documents. MacArthur was named Controller to rebuild and reorganize the country of Japan including rebuilding of the government, the economy, and the country following the surrender.

The history of the Bagley began in 1935 at the laying of her keel. She was launched and commissioned in 1936 and was assigned to the Atlantic Fleet. Her primary duty was in and around Cuba.The Destroyer was sponsored by Michelle Worth Bagley, sister of Ensign Worth Bagley USN, in whose honor the ship was named. The USS Bagley 386 was at anchor with her seven sister ships of the Bagley class at Pearl Harbor December 7, 1941.

She was one of the first to be strafed and returned fire, putting down 5 attacking enemy planes that day. Two of her sister ships were badly damaged, repaired, and later lost at sea in Naval battles. The Bagley repelled Kamikaze aircraft several times later on, but due to her deck guns, the kamikaze planes never reached her deck. As soon as other crafts could get steamed up and under way, the Bagley steamed out the channel of Pearl Harbor and went in search of aircraft carriers that launched the planes that attacked Pearl Harbor.

She is a 12-star United States Warship. She participated in the Layce operation, participated in the Okinawa attack, the northern Luzon and Formosa attack, the battle of Surigao Strait, the landing at Leyte, the assault and occupation of Iwo Jima, and the assault and occupation of Okinawa Gunto. The accompanying picture was supplied to me by Virgel Gust, and it shows him behind the Japanese Officers signing surrender papers.

From the official Naval records, the History of the USS Bagley DD386: "The Destroyer USS Bagley literally fought the war from beginning to end, fighting against the Japanese attackers at the Pearl Harbor disaster, to conducting part of the Japanese surrender ceremony on her deck. In between, the dauntless Destroyer won twelve battle stars, shooting down 11 Japanese airplanes, rescued 465 survivors of the first battle of Savo Island, and fought in every important operation of the war in the SW and Central Pacific areas."

Virgil, who served on the Bagley from 1942 until 1945 still runs his clothing store on McLeod Street in Big Timber, Montana. He climbs the steps to his office every day in the store he has owned and operated since 1947. He is looking forward to his 100th birthday this week!

I am most grateful to have had the phone call from this WWII Naval War Hero. Of course, I do not remember him when we visited the store in the late 1940's and 1950's, but I do remember the store itself. As a young Gene Autry fan, I always had to get a new pair of cowboy boots when we visited. Virgil is most proud to display a model of the Destroyer Bagley that he served on in WWII in his store in Montana. Virgil is very proud of the fact that he has been able to stay in business through a recession, pandemic, floods, and the competition from shopping malls and online stores. Happy 100th birthday, Virgil Gust!

It seems rather fitting to mark Virgil's 100th birthday with recipes from one of my favorite cookbook compilations, "Celebrating 90 Years of Food and Friendship," which was published by the Big Timber Lutheran Church in 1997. Thanks, ladies, and happy 100th birthday, Virgil!

In a small bowl, mix:

Put the layer of batter into a 9 X 13 pan. Alternate layers of batter, then sugar mixture, ending with sugar mixture on top. Bake at 300 degrees for 1 hour or until the inserted knife comes out clean.

(by the cookbook committee)

salt and pepper to taste

Place lamb in a shallow roasting pan. With a sharp knife, make slits on the surface of lamb and insert garlic slivers. Gently squeeze lemon juice over lamb, rubbing into slits and surface. Sprinkle with salt, pepper, rosemary, and basil, and rub seasonings into the surface. Roast in a 325 degree oven for 25 minutes per pound or until the meat thermometer registers 150 degrees for medium rare. Remove from the oven. Cover and let stand 15 minutes before serving.